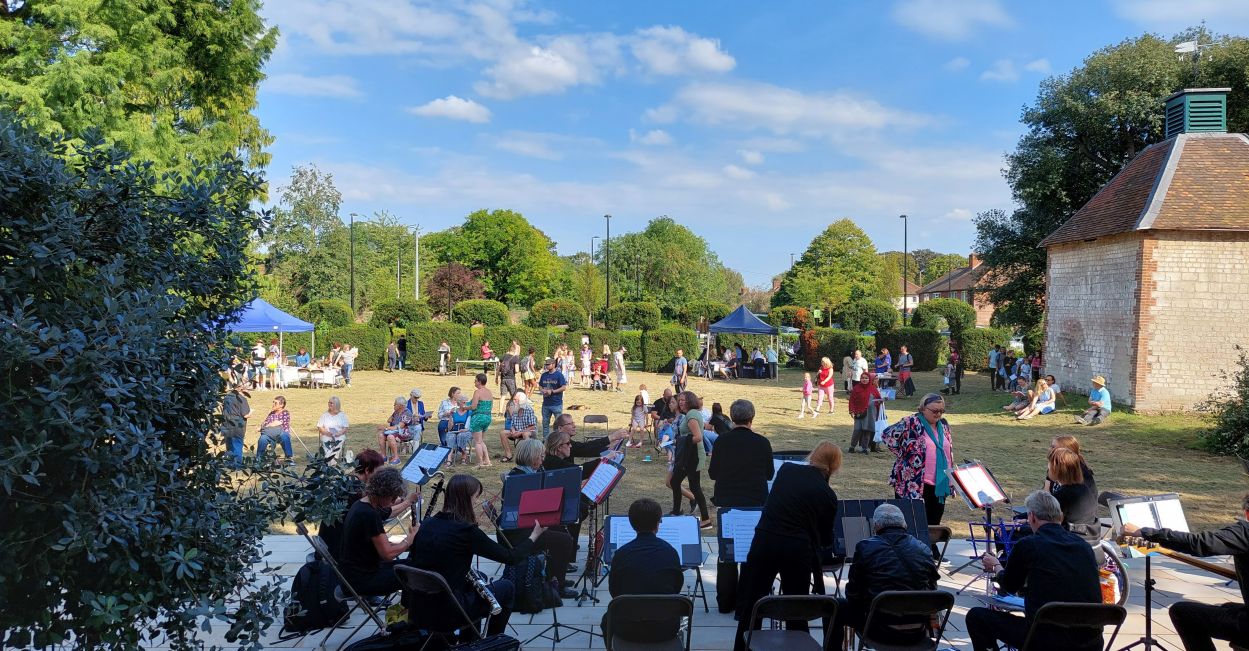 18th September marked the opening of Canons House and Grounds London Borough of Merton, some 6 years after Southern Green commenced work on the project. More importantly, the day dispelled the perception that the Grounds were private and the site was reborn to serve the very diverse community of Mitcham.  People of all ages and backgrounds came together to celebrate the restoration of Mitcham’s wonderful green asset that will offer a vital resource for improving mental health and wellbeing in the community.

A heritage trail was devised to introduce the public to the delights of this amazing site. The site’s rich layered history includes a medieval pond associated with the former house and related to Southwark Priory, 1510 Dovecote (the oldest building in Mitcham), a beautifully restored Grade II* Georgian villa dating from 1680, the remains of extensive 18th century walled gardens and a 1920s cinder running track (part of the extensive News of the World sports ground) as well a collection of rare and beautiful trees.

Although the grounds became a public space in the 1950s, no design work was carried out to ensure it functioned as such.  The subsequent development of a Leisure Centre in the middle of the site and associated car parking created a number of obstacles to understanding and enjoying Canons’ many assets.

As part of the National Heritage Lottery Fund £6.0m funded project, the design challenge was to transform this disconnected site into a valuable public park, creating new facilities including: a new café, play area and community garden, improving access into and through the site, as well as restoring the many historic features and using them to unify the site and reinforce its special qualities.

Hundreds of people attended this successful event: going wild in the unique and bespoke Studio Hardie play area co-designed with local children; marvelling at the produce of the community garden and using traditional Mitcham Lavender to create artworks.  Visitors enjoyed drinks and cake from the café inspired by the community garden and sat on the lawn in front of the house listening to the concert band  (band members including representatives of local Friends group) playing on the new terrace.  There were opportunities to peek inside the restored dovecote, try steel drumming on the West Lawn, sit in the beautifully restored walled garden and walk around the grounds to take in the pond, obelisk and, for the more energetic, run around the restored athletics track.

Simon Green, Director, said "the Canons was one of the most challenging but ultimately one of the most rewarding public park restoration projects Southern Green has undertaken – it was great seeing the previously little-used site come to life on Saturday."

Alison Plant, Canons House & Grounds Project Manager, said –"working with Southern Green, lead consultants and their well-established team of professionals on this challenging project has been a pleasure.  Their expertise in running National Lottery Heritage funded projects has been of great benefit to us and we are delighted with the outcome of both the building and landscape contracts at Canons House & Grounds."…